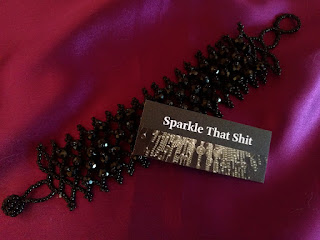 Check emails
Check  Instagram
Check Facebook
Check it off the list
Strike it off
Cross it out
Delete it
Highlight it
Remove it
Put it on the calendar instead
Purge it
Delete history
Clear phone history
Clear texts
Update mailing lists
Bounces
White listed
Reorder
Reorganized
Make files
Folders
Folders in folders
Photos
Docs
Spreadsheets
Print  the
List of lists
at August 25, 2021

Delve into this juicy moment with this luscious mindfulness meditation.
at August 18, 2021 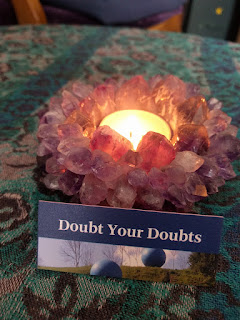 When I was young, I would cry all the time,
I used to be different, I used to be shy,
I'd stay in my room, my nose in my books,
I never felt comfortable with any of my looks.
I felt lost behind my glasses, hiding in my hair,
Over sized sweaters and jeans is all that'd I would wear,
Hiding my body, not comfortable in my skin,
Underweight, even my emotions were thin.
I still cry, but not for no reason,
I become more outgoing every single season,
I feel at home wherever I am,
I'm a tattooed love babe, but I don't have a tan.
I love my glasses, I have excellent hair,
Little black dresses and scarves are what I wear,
Showing my body, feeling comfortable in my skin,
Overweight now, though I somehow still feel thin.
I used to not love myself, but now I do,
Love my cats, my kid, and my husband too.
Love living my life, and feeling loved,
Grounded on the earth, blessed from above.
Blessed be
at August 11, 2021

Window of Your Soul 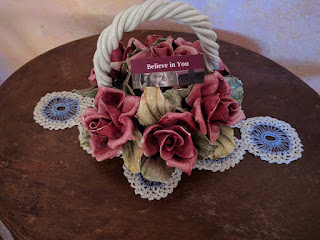 Diamond Quality
Earn my living honestly
Show gratitude in every way
Honor students, teachers, elders
Calm and patient as the garden
Compassionate as the gardener
This is my vision
My diamond
And there is nothing harder or clearer
Than my resolve
at July 28, 2021 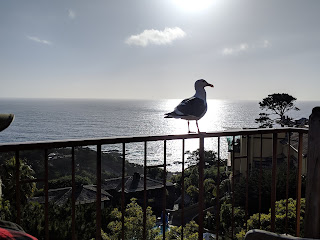 Thank you for this article, For the New Year Say No to Negativity By John Tierney and Roy F. Baumeister

I found it quite interesting and have shared it with a few clients already.

Specifically, I liked "Post-traumatic stress disorder became common knowledge but not the concept of post-traumatic growth, which is actually far more common. Most people who undergo trauma ultimately feel that the experience has made them a stronger and better person." I feel that often my clients are pretty invested in being a victim, and part of my job is to get them to be invested in being a hero instead - ie, change the script, heal and deal, recognize the lesson in the trauma and then move on.

I disagree with "A single bad event can produce lifelong trauma, but there is no psychological term for the opposite of trauma because no good event has such a lasting impact." I would say that going to Wesleyan was not just a good event, but has still a lasting impact on my life. Interestingly,  I wanted to go to Georgetown but didn't get in, despite this being a "certain win" from the college counselor. I randomly had applied to Wesleyan which was "out of my league" again according to the counselor, but I had visited with Diana the year before and decided to apply as my long shot.

I am thankful and aware of this good, and of the very good advice you gave me when I got divorced - always be invested in Amber's education. From early childcare doing Montessori the first seven years, Charter schools during junior/high school, to her graduating from UOP, I feel I totally see the good in these decisions and the lasting impact on Amber as well as my life.

This paragraph is great -"Politicians and journalists tap into primal emotions by hyping threats from nature, technology, foreigners, political opponents—whatever will instantly trigger the brain’s alarm circuits. The presidency of Donald Trump has been a ratings bonanza because it has brought out the worst on both sides. Rarely a week goes by without some new warning that civilization is doomed."

"The Rule of Four: It takes four good things to overcome one bad thing" was interesting. Certainly one of the strengths in Chip and my marriage is that we are constantly kind, considerate, polite, and supportive. We often talk about "the past" and how amazing our journey has been, as well as reiterate good experiences, mainly traveling together. "Engaging in nostalgia was long considered a sign of depression, but experimenters have repeatedly found it’s a tool not just for appreciating the past but also for brightening both the present and the future. One reason that happiness increases beyond middle age is that older people spend more time savoring good memories instead of obsessing about today’s worries."

Pretty much the only thing we fight about is our kids - which is why prenuptial agreements are our friend (another good piece of advice you gave me before getting married, with a lifetime positive impact). Anyway, besides for having a "don't ask, don't tell" policy, we've also been practicing a technique I adapted from a compassionate communication workshop called CAMRA - we each take turns to say 3 Celebrations, 3 Appreciations, 3 Mournings, # Reassurances, and 3 Action steps. One of my clients calls this "the shit sandwich - put the negative between slices of positive". However, it works because when we start with the celebrations and appreciations, the brain releases the feel-good neurotransmitters (serotonin, endorphins, dopamine). This makes it easier to hear the mournings, which tend to release the fight or flight hormones (adrenaline, testosterone, cortisol). There is an implicit agreement that as we listen to each other, it is not up to us to fix anything. This goes into reassurances, again it's not up to the partner to provide, just to listen. Last is action steps, which implies personal responsibility and the opportunity to stop focusing on the problems (negative) but the solutions (positive). It also has the 1:4 ratio, I notice.

I liked this - "Of all of Mark Twain’s aphorisms, the one with the most empirical support is a bit of wisdom from the title character of Pudd’nhead Wilson: “To get the full value of a joy, you must have somebody to divide it with.” Psychologists call it capitalization and have found that sharing good news is one of the most effective ways to become happier—but only if the other person responds enthusiastically, so make sure you rejoice in your friend’s good fortune (or at least fake it). Sharing good news makes the triumph more significant, so it’s more likely to be recalled later, which is another proven way to boost happiness." This is why I try to post something positive every day on my social media, rather than repeating bad news.

Thoughts on a Quiet Moment 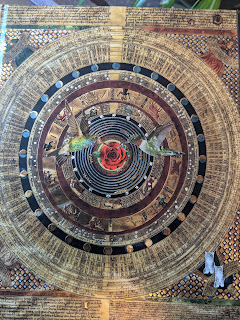 When I get really quiet, this is what I hear... The hushed whir of the furnace and I set the thermostat to 65 degrees after going downstairs first thing in the morning. The slightly sticky sound of my feet padding across the kitchen floor. The bubbling of boiling water and the glass tea kettle, cabinet doors opening and closing as I find my favorite big blue mug with the waning crescent moon on the side, the rip of the tea bag packet, Earl Grey today. The sound of Poppy purring on my lap - June only makes wuff wuff sounds, ironic since her name is June E. Purr.
There's the sound of satin as I tie back the curtains with the strips of ribbon that have been safety-pinned on. As the night fades into gray, I hear the start of the morning chorus - first the crows calling in the neighbor's oak tree, then the Canadian geese flying back to Neary's Lagoon, and if I'm lucky I'll hear my favorite hummingbird investigating the purple and white salvia right by the sliding glass door. I always pause when I hear that particular hum and whir, look for the flash at emerald wings or ruby red throat.
When I concentrate, I hear the tinnitus ringing in my ears, but under that there's always some song, some background score. For some reason I get the theme song from  Big Bang Theory stuck in my head a lot, it morphs into " Now you're just somebody that I used to know" or the a capella patty cake cover of Adele song "Send My Love"."
Sooner or later I hear my husband upstairs, going pee, it always amazes me what a waterfall he releases. Maybe I'll hear the shower, or he'll come downstairs and start his own routine - The grinder is loud but brief, a faint noise of pouring water brings the good smell of fresh coffee into the room. I listen to his dreams, more aware of his rich voice and blue eyes than the actual content, which is often long and complicated.
At this moment, there's the scratch of the pen, my sighing breath, and an inquisitive sound from the cat who wants more attention now that my journal is taking her place on my lap. I deeply appreciate these quiet, peaceful mornings.
Blessed be.
at July 07, 2021 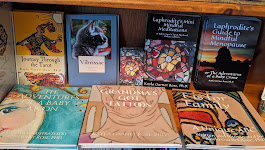